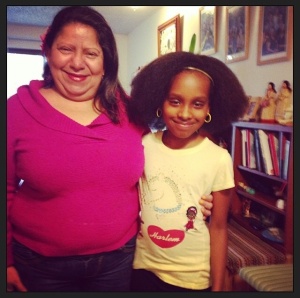 My daughter with Abuela last fall.

Nearly twenty-three years have elapsed since the day that the paths of two little girls of color crossed. Raquel and I have grown from our preteen years to adulthood together. Indeed at every high and low that we’ve faced we have been there for each other. When Raquel had her first child in 2003 I was in the delivery room with her. When I carried my own child a year later it was Raquel’s support-along with that of my mom and sisters-that got me through. In the spring of 2004 she returned the favor, holding my hand and coaching me through my labor. She was the only person at my side when my daughter came into this world, holding me down at a time when even the father of my child refused to do so. Adulthood would bring more surprises and storms-the biggest one being my Mama’s untimely death in July 2005. Since that time Wendy, Raquel’s mom, has become a surrogate mother to me. She comforts and chastises me when necessary, and proudly tells everyone that I am her daughter. With my daughter’s maternal Grandma being deceased and her paternal Grandma being  9000 miles away in Dar es Salaam Wendy also fills the role of Grandma. My daughter calls her Abuela just as Raquel’s children do. In December we spend Christmas Eve celebrating with Raquel’s family. In December of 2012 Wendy grabbed my hand as we watched the kids open their presents.

“Daniella, Raquel told me of the trouble you’ve had with your car and your tires lately. It’s very important to me that you and my granddaughter are safe while driving. So Javier and I decided that we are buying you a brand new set of tires for Christmas mi amor!”

I started bawling, surprised at the unexpected gesture.
“Wendy you guys don’t have to do all that-”
Wendy brought her finger to my lips. “Daniella SHUSH! You have to learn to let people help you, and you have to start telling us when you need things, okay? We are family!” I wiped my eyes and nodded my agreement.

There have been days where Raquel and I feel like we can’t take it anymore. There are times she calls me, overwhelmed with the pressures of motherhood. I listen to her, then tell her to drop her children off with me and take a night off for herself. When I feel my anger at the father of my child building up to an unhealthy level I call Raquel and she talks me down from the ledge.

I can honestly say that neither one of us could do what we do without each other. And I think of how different both our lives could have been.  I share the story of my friendship with Raquel because I often encounter adults who are just as fearful of other cultures as I was sitting on my school bus. Scarred by traumatic encounters of discrimination when young we internalize that negativity, learning to fear and distrust all members belonging to that group. I’ve heard this from West Indian and African immigrants to the USA, who are often teased by African-American children upon arrival in the United States. When I hear these tales I remember my own torment in Cali at the hands of Chicanos and later in Seattle at the hands of African-American kids. So I understand and I’m empathetic. There’s nothing wrong with seeking to protect yourself; I think that’s a human reaction. But if you let past pain govern all of your interactions with people from a particular group you may miss out on a good thing.  What if I ignored the greeting of the charcoal-haired girl on bus #556 that day in 1991? What if I let my previous bad experiences with Latinos be the deciding factor, rebuffing her out of my own prejudice and fear? I’m glad that openness prevailed, for I would have lost out on my best friend if I’d gone the other direction. Because I made the choice to trust all those years ago I gained more than a friend; I gained a second family.