Day Eight: A Book You Love & One You Didn’t

Confession time: in my early 20s I had a sordid addiction to hood novels, more elegantly known as urban fiction. Though I grew up reading various giants of the African-American literary canon, the grittiness in the stories of the inner-city intrigued me. In certain ways, they put me on to an experience that I only knew on a surface level.  But even while indulging in my literary hood escapism, I had expectations.  The voice of the writer, the intricacy of her/his prose and the attention paid to the editing process were still highly valued and the criteria I judged the novels by. I’d browse shelves at Barnes & Noble in vain for my fix, reading ten pages of a book and putting it back because the words on the page didn’t stimulate me enough to justify forking over my cash. That all changed when I discovered the work of Tracy Brown. 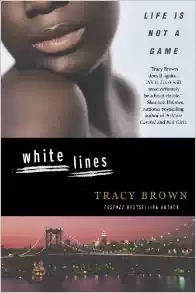 The first novel of Browns’ I read was “White Lines”, and I was quite enamored with it! Set in New York City in the 1980s, it tells the story of the crack epidemic from multiple vantage points. In the introduction Brown states it was her intention to capture both the feel of those years and the consequences that the drug game had for the addicts and on the neighborhoods and families. At 512 pages long “White Lines” is longer than the typical novel in this genre, but every word is timely and needed. The struggle of the protagonist, Jada, resonated with me deeply, so much that the pages of my copy are warped by the tears I shed while reading it. Thirty years have passed since crack first plagued America. But given the massive popularity of songs like Fetty Wap’s “Trap Queen”, I am grateful for the work of writers like Brown, who can eloquently tell the stories that surround drug trafficking and drug use without glorifying either.

Now that I’ve told you about a book I loved, let’s move to one that I have decidedly less charitable feelings towards:”Midnight” by Sista Souljah. Known as a fiercely vocal activist in the early 90s, Sister Souljah also wrote “The Coldest Winter Ever”. TCWE was one of the early novels of the urban fiction genre and is still considered a classic by hood lit enthusiasts. I read TCWE and enjoyed the cautionary tale of the main character, Winter Santiaga. So when word dropped that Souljah was writing a prequel to expand the narrative of Midnight, who played a supporting role in TCWE, I was hype to buy and read it.

When I arrived home from the bookstore with “Midnight: A Gangster Love Story” I waited until my daughter was asleep to start reading. By the time I finished reading it I resolved to never again in my life give Sister Souljah one red cent or to say anything positive about her. To say that “Midnight” was disappointing would be an understatement. Throughout the novel, Souljah uses the character Midnight to voice her disdain for African-Americans, to the point that I found myself repulsed. If I wanted to listen to my ethnic group be narrowly represented and grossly caricatured I could have Googled Jim Crow memorabilia and saved myself $14.99! Souljah reserves her harshest invective and judgment for African-American young girls and women, which I found especially disrespectful considering that’s the only demographic checking for her work. I’ve discussed Sister Souljah’s writing with other AA women, and I know some have little issue with the way their image is treated in her novels. I strongly disagree. You cannot dishonor me and still count on my financial support. So even though a trailer for the long-awaited film adaptation of TCWE, the only book by Souljah that I like, circulated in 2015, I will not watch it if it ever reaches the big screen. When it comes to literature or film I refuse to have anything to do with that woman.

← 30-Day Challenge Day Seven: Your Tattoos & What They Mean The Nail That Sticks Out →