Home » African Diaspora » An Afternoon at the Schomburg

An Afternoon at the Schomburg

On my recent trip to New York City, I spent my last hours visiting the Schomburg Center for Research in Black Culture. I was elated to walk through its’ doors. I reminisced back to 1991 when I learned of the center’s existence while reading The Autobiography of Malcolm X and yearned to go there myself someday. Now here I was, finally at one of the preeminent and largest collections celebrating the African Diaspora in the United States!

It was a wet and windy day in Harlem, so I felt quite lucky when we found a parking spot near the entrance. I hopped out, sprinting to the doors in hopes of saving my Afro from the howling wind, waiting in the foyer for my partner to join me. When we entered we were greeted by a kindly sepia-toned Black woman.

“Welcome to the Schomburg”, she said cheerily, “have you visited us before?”

“No, this is our first time here”, Brian replied.  Our greeter then launched into a quick explanation of features of the center. “We also have a current exhibit on Black Power that may interest you”, she said, gesturing towards the main exhibit hall. Our interest piqued, Brian and I made a beeline to the second floor, eager to see what the Schomburg had in store for us.

After running up a short staircase and making a left we were in the exhibit hall, facing a midnight violet wall with white bold white letters proclaiming that phrase, a phrase which evokes wildly differing emotions in Americans after all these decades:

Initially, we browsed the exhibit together before drifting off to explore solo. I paced the floors slowly, taking time to view both images already burned into my memory

and unfamiliar ones, like this one below of James Baldwin at a protest: 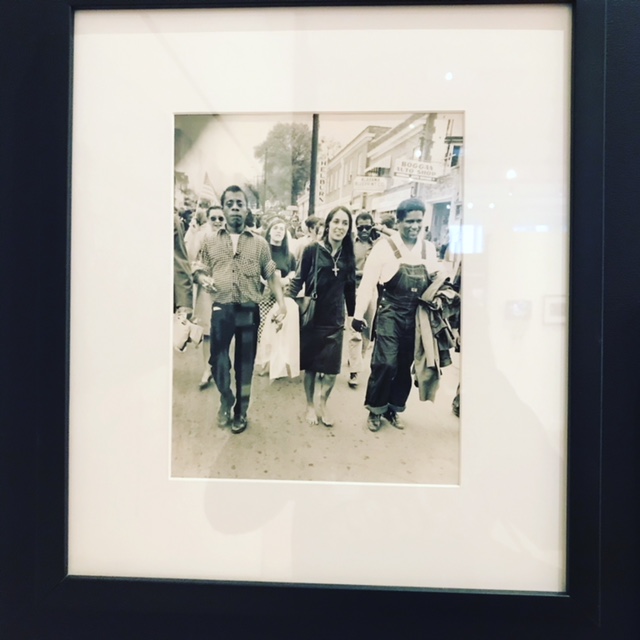 Though the Black Power movement in the United States was the focus of the exhibit, it demonstrated both the influence it had on non-Black people of color as well as the global nature of the struggle:

The Dalit Panthers of India

The Brown Berets attending a “Free Huey” conference held by the Black Panthers in 1968.

There was a time when the sight of the black berets, chic black leather coats, and massive Afros that symbolized the movement would fill me with nothing but pride. But on that day, I felt ambivalence.

The conviction and exuberance shown in the exhibit saddened me, for I know too well how the story ended. I know of the assassinations of major figures like Malcolm X and Fred Hampton

“We must cease quarreling among ourselves”. Malcolm X was murdered seven days after uttering these words.

I know of the constant and ultimately successful campaign of the United States government to infiltrate and destabilize the freedom movement of Black Americans:

Aside from these two aspects, I know the story and flaws of some characters in the movement, flaws which I can’t forgive or ignore.

The late Eldridge Cleaver was one such figure. Though images of him were part of the Blck Power exhibit, I was devoid of any need to take pictures of his portion. Indeed, when I saw his name the familiar rage and loathing he conjures in me returns. Cleaver was an admitted and convicted rapist. This didn’t halt his ascent to power within the BPP, nor has it dissuaded future generations from revering him. When confronted with his image at the exhibit I sucked my teeth sharply and turned on my heel. No respect would be paid to this man or any others in the BPP who abused and violated women.

Once we finished in the main exhibit hall, we went downstairs to see the Power in Print exhibit, which focused on the printed arts of the movement. There was one poster that especially wounded my soul:

It was the year that got to me. 1975. Five years before I was born, activists and organizations were mobilizing for causes such as education, healthcare, housing and ending police brutality. Forty-two years have passed, yet we are still grappling with these issues.

What does it mean to be American?
I think the struggle to be free is our inheritance…Brother Ali, “Letter to My Countrymen

It’s enough to make me wanna holler. It’s enough to make me sigh, to roll my eyes and kiss my teeth in cynicism, to think that change isn’t possible. But I know better. The America that I live in, though frustrating, isn’t the same America that greeted Arturo Schomburg, the founder of the Schomburg Center when he arrived in 1891.It’s not the same America of 1968 when my then eight-year-old mother was being casually called a nigger in Mississippi and picking up her food from the back door with my great aunt. So while I felt pessimism at times during my visit to the Schomburg, it was ultimately overcome by a renewed sense of resolve, making this an afternoon well spent!